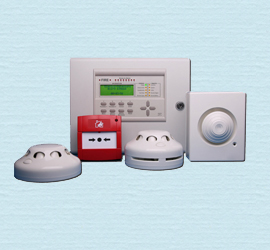 Intelligent Addressable Systems offer benefits in terms of speed of detection, identification of the location of fire and easier maintenance. Intelligent systems also offer tolerance to faults in the system wiring, which allows a single pair of wires to be used to connect up to 200 devices to the system, allowing cost savings in the wiring of large systems.

Addressable Fire Alarm System is the answer for large institutional buildings, where the source of fire needs to be located quickly. Addressable smoke detectors give the exact location of the fire/smoke and one can immediate localize the precise are under threat by reading the information off the central fire alarm control panel display. The sensitivity and other specific features of each detector can be programmed through an intelligent addressable control panel that communicates with its devices through sophisticated data protocols.

Conventional Fire Alarm System provides the earliest practicable fire detection and warning. This system consists of smoke or heat detectors at designated locations, to detect smoke or heat at the earliest during any outbreak of fire.

Conventional fire alarm system would be the answer, where smaller cost effective the detection systems are required. Conventional detectors, upon detecting smoke, set off the particulars zone that they are connected to. The central control panel, indicates the general area of fire, and effective fire fighting can be taken.